The 50 Most Influential CMOs within the World in 2020

Apple's Phil Schiller was the world's most influential chief marketing officer (CMO) this year, according to recent research by Forbes, Sprinklr, and LinkedIn.

Schiller, who stepped down from his role in the summer, turned out to be the most influential CMO worldwide based on the criteria of the study.

Tech was the industry with the highest number of CMOs on the list (16 out of 50), followed by Financial Services (5) and Restaurants (5). 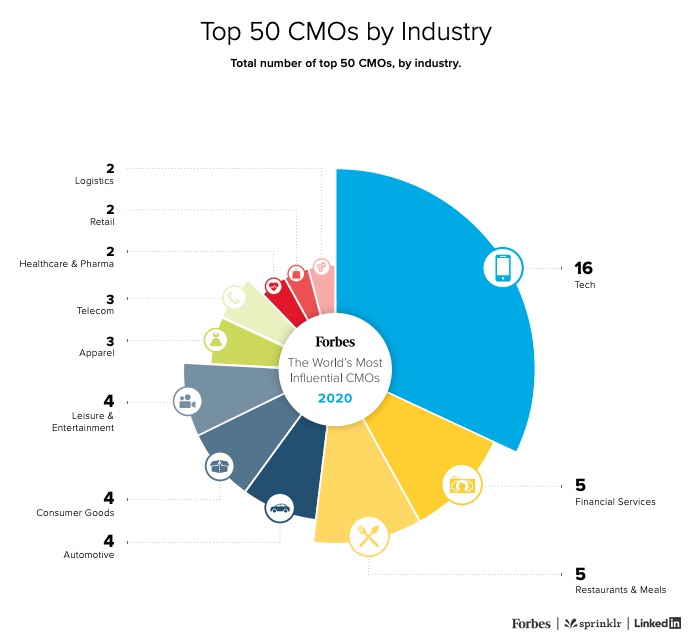 About research: The ranking
of the 50 most influential CMOs in the world was based on three criteria:
Brand performance measured by an analysis of 832,404,704
branded social media shares, likes, retweets and comments;
personal impact measured by an analysis of 130,489 news, blog,
Web and twitter mentions; and industry and internal influence as
measured by analyzing more than two million profile views and
Connections on LinkedIn and more than 600,000 engagements on the
Platform. The estimated time period was February 15 to June 30, 2020. See
the full report for the full methodology.

Within the age of authenticity, what position does design play in branding presidential campaigns?

12 Exceptional Newsletters That Will Change Your Approach To Email Forever

How Do I Do SEO For Ecommerce Websites?

Everything you need to know about LinkedIn video

Everything you ever needed to know about social media…